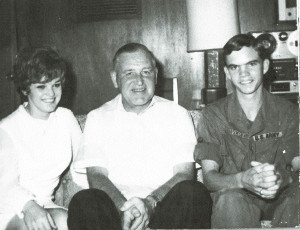 This am, my beloved sister, Marley Covert Hedges, passed away.  If you recall, you and I had Conversations about her a few times, plus a picture of her and I when she visited Viet Nam on the hospital tour.

She was a beauty queen, sang good enough to make the circuit in Las Vegas for 3 years before she married and became a mother.

Marley had a 7 day tour of Vietnam sponsored by Bob Hope and the USO.  I had no idea she was coming and was quite surprised when the staff officers sent for me.

She was tough as nails, as those Evac Hospital wards were not for the faint of heart. She deserves to be recognized.

She later became the executive assistant to the president of a prestigious law firm in Phoenix, and retired to her home In Phoenix in 1995.

I am sad she will not see her picture in the New Army Museum that Is opening next year.  The Army decided to have a room dedicated to the USO Entertainers.   I sent them her story, as requested by the curator.

My unit reunion is in DC this Sept 30, thru the 4th of Oct. we are going back the following year to tour the museum in force. This year we will review the goings on, and will have lunch on the grounds.