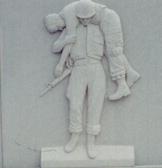 A History of the Schuylkill County, Pennsylvania, Vietnam Memorial

The history of this memorial started out back in May of 1986. Our Post, which at the time was a young post, was formed in the early part of 1984. In May of 1986, we had "the Moving Wall" come to our town of Pottsville,Pa. We had a very good turnout for this event. A lot of parents and relatives of the Soldiers that died over in Vietnam, from Schuylkill County were there. At this event, a couple of our Members got together and promised the parents that we would build a Memorial for these Veterans

The small group that started it tried raising monies by having car washes, selling chances and leaving donation containers in strategic spots around the County. It was a very slow moving process, because by the end of 1995, they had collected approximately $13,000, this was over almost an eleven year period. The small Committee had at that time an approximate amount they needed to construct the Memorial, it was approximately $75,000. They had 3 different sites to pick from, they picked the one in Schuylkill Haven, because it was along a busy highway, also right at the entrance to a College Campus, and there was room for plenty of parking, as it was property leased to us for $1 by The United Church of Christ in Schuylkill Haven, Pa

Sometime at the beginning of 1996, the local news media, The Pottsville Republican & Herald got wind of our project, and they had said that they would help us in our endeavor. They advertised heavily in the Newspaper for donations, and they also got together and put each and every Veteran , from Schuylkill County that died over in Vietnam, their pictures, and bios. They really did a tremendous job, because, in approximately 3 months time, we had collected $120,000. Enough to start and pay for the construction and also have enough in escrow to keep maintainance on the Memorial. We originally had planned to have the project done by Veteran's Day, Nov. 11, 1996, but we hit some snags and had to hold it off until the following year. We then changed the date to the day before Mother's Day, since we promised the Gold Star Mothers that we would do this for them

Remember the Veteran
Some gave all and all gave Some

Pictures of the Memorial